As students return to school, a handful are preparing for a semester on the other side of the classroom. McClain Kuhel is a social science education major who will be student teaching this semester. He’s also an unlikely campus celebrity at Union.

Quiet and thoughtful, he never seeks the spotlight. And yet, many of Union’s faculty and staff would readily admit to being big fans. The reason is simple: long before he had his own classroom, he took out the trash.

Kuhel (pronounced “cool”) began serving in Union’s Custodial Services in 2016 as a junior while working toward his first degree, a bachelor’s in history. He says if he could do it all over again, he’d start cleaning even earlier. “Lori (Brasuell) is one of the best bosses I’ve ever had,” Kuhel said. “And it would have made my first year of college easier if I’d started picking up trash sooner. From the president on down, everyone knows my name.”

“It’s not just his custodial conscientiousness,” said Tanya Cochran, director of Union’s English Program and one of Kuhel’s many fans across campus. “McClain is also one of the kindest, most considerate and most academically engaged students many of us have ever taught.”

For his part, Kuhel maintains cleaning and academic success go hand-in-hand. “I can’t focus when things are dirty,” he explained. “I can’t expect other people to focus when it’s dirty either. So, I like to clean.”

It was a peaceful space that first attracted him to Union as a high school senior. “I toured UNL, and when everyone was going to lunch, 10,000 people piled out onto the sidewalk around me,” Kuhel said. “I knew I needed a smaller school.”

“I’ve lived in Lincoln my whole life, but I’d never known anyone who went to Union, and I’d never been on the campus. My mom and I decided to take a tour out of curiosity. When I got to Mr. McClelland’s classroom and saw the wall of plants, my eyes lit up.” An avid gardener who has even registered his own iris hybrid, it was exactly the sort of space he wanted to study in.

However, coming from a Lutheran background, he was an unlikely prospect for a Seventh-day Adventist school. He had nearly forgotten that first impression by the time he picked Chadron State College. “I loved the Chadron campus,” Kuhel said.  “It’s beautiful up there. But the town was just too small. There was only a Walmart and a Country Kitchen to take dates to and the nearest city was two-and-a-half hours away. I thought, No. I can’t do this.”

Back home in Lincoln after one semester and unsure what to do about college, he received a postcard from Union. “It asked if I was still interested. I thought, I’ll give it a shot. And here I am. The postcards work.” Like Goldilocks in the fairy tale, he’d finally found a campus that was just right though its inhabitants were somewhat strange.

“All I knew about Adventists before coming to Union was that they’re vegetarians and they go to church on Saturday,” Kuhel said. “And now I know they’re not all vegetarians. It’s been fun learning about a whole new culture next door.”

“My first semester at Union, I remember being asked if I had been in Pathfinders,” he continued. “I had no idea what they were talking about. I worried it was a test we had to take. And then I was asked if I like haystacks. Like on a farm? And people kept talking about someone named Ellen White. Little did I know I’d take entire classes about her. Now I’ve become an ambassador to the outside world. People ask me questions about Adventists, and after all these years and religion classes, I’m almost qualified to answer.”

Though he started as an art education major, he soon gravitated toward history and international relations courses, graduating in December 2018 with a history major. “I loved all of Dr. Tyner’s and Dr. Banks’ classes, but Modern Middle East taught by Dr. Banks was my favorite,” Kuhel said. “It’s a region that’s always in the news, and he connected all the dots and filled in all the blanks. That’s why I like international relations and history. It adds context and explains everything.”

After graduating, he started to consider his calling might not just be to study history, but to share it. “The pandemic gave me a lot of free time to think about what I really want,” he said. “I really want to teach civics, government and history. I had bad teachers in high school, and I had really good teachers too. I thought I could be one of the better ones.”

Now once again an education major and nearly finished with his tuition-free second degree courtesy of Union’s Guaranteed Education program, he’s come full circle. This semester, Kuhel is going back to his old high school, Lincoln East. He feels lucky to be supervised by his favorite history teacher from high school who inspired in him a passion for the subject years ago. With his work ethic and understanding of the connection between physical space and mental clarity, his classroom will be a place where ideas can flourish. 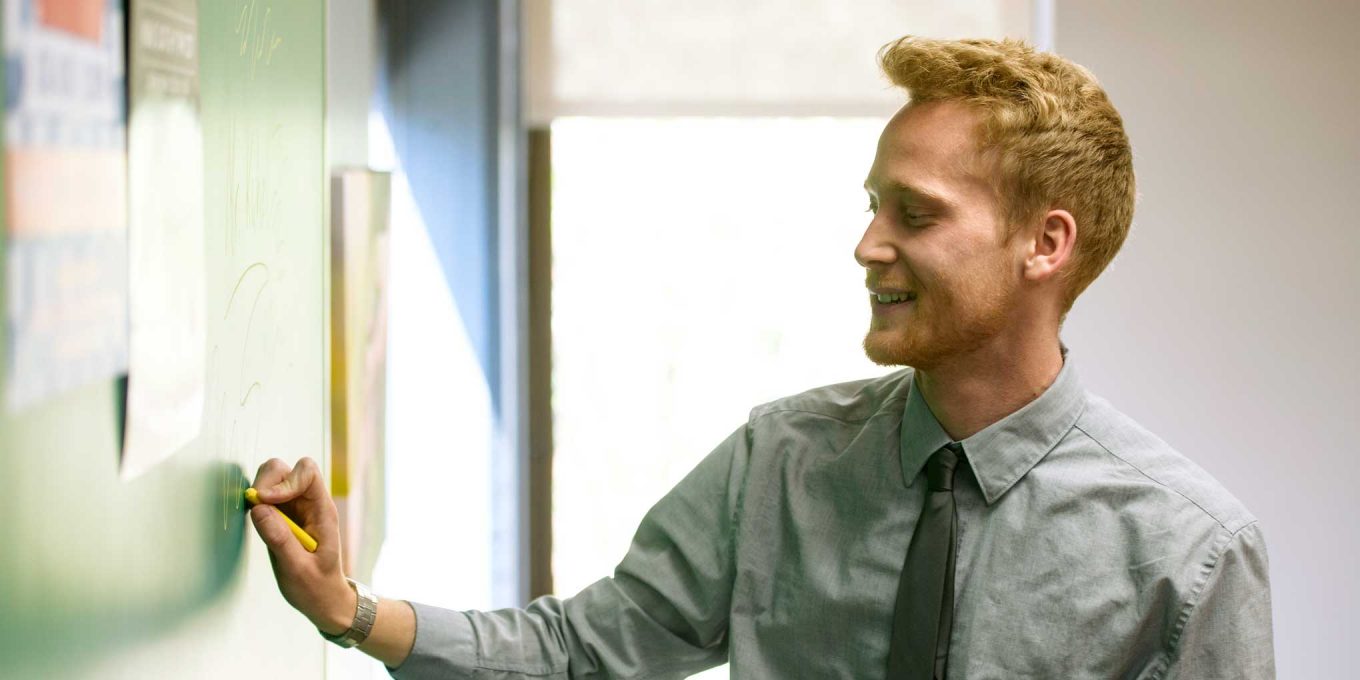